Are These 12 Immune-Boosting “Weeds” Growing in Your Backyard? 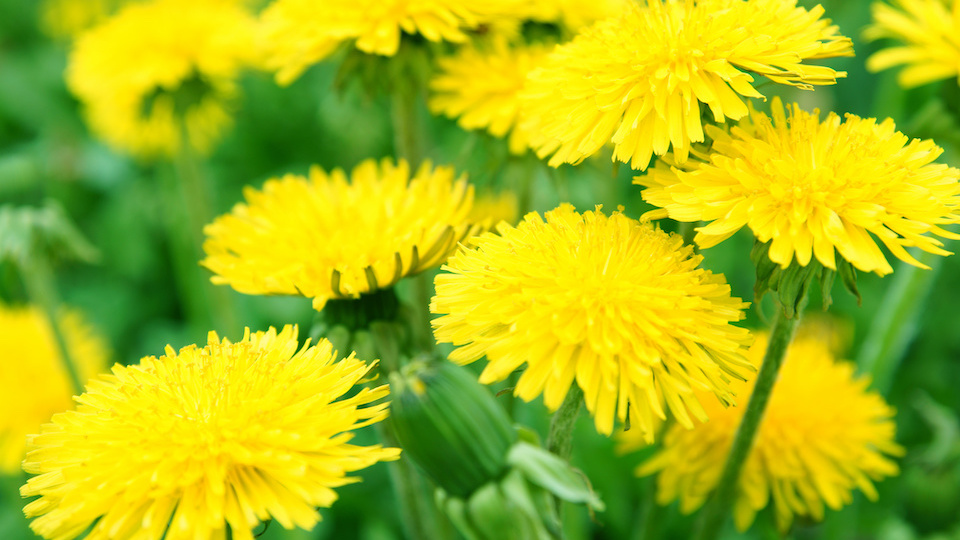 If you’re like me, you eagerly await the arrival of spring so that you can escape the house and start gardening again. You probably work hard on your garden like I do – with one of the biggest chores, of course, being weeding. Until recently, I had a serious vendetta against weeds. But then I found out that by obsessively removing all the weeds from the garden, I was actually throwing away valuable produce!

I didn’t realize it at the time, but an unkempt backyard is often full of food, especially edible greens. Many of these “weeds” are actually wild relatives of gourmet crops that we pay top dollar for. And the crazy thing is, the wild weeds often contain higher levels of nutrients than cultivated varieties, with even more potent healing capabilities.

Although many of the therapeutic plants you see featured in health and wellness products seem exotic, many others grow closer to home. You probably already have a few in your garden – deliberately planted or growing naturally as “weeds”.

The truth is, immune-boosting plants are all around us, and you don’t even have to look that hard. Many weeds or wild plants can be foraged or harvested right in your backyard.

Here are some of the best herbs you can use to support your immune system for everyday health.

If you’ve ever been on a hike and found burrs on your clothing, you can bet you’ve passed by some burdock. Those sticky burrs were the inspiration for velcro, and if you get them on you, you’ll know why. The best way to deal with this annoying weed? Eat it!

Burdock is a multi-use plant that is both eaten as a food and used as a medicine. The use of burdock as food and medicine stretches back hundreds of years. Today, research shows burdock’s potential as an immune-booster.

Part of burdock’s immune quality has to do with its ability to protect against inflammation. After all, inflammation is an immune response in the body—including both chronic inflammation or temporary inflammation from allergies, for instance. Burdock is also a potent antioxidant, with compounds that aid the body in preventing free radical damage and destruction to DNA, which can give rise to diseases such as atherosclerosis, cancer, asthma, and diabetes.

Weakened immune systems are one way that cancer can take hold and grow. A recent study found that burdock contains an exclusive compound that protects, suppresses, and can even directly kill tumors. In addition, burdock can discourage the growth of bacteria, fungi, and other foreign invaders, which would otherwise compromise the immune system.

Widely known and despised as a weed, chickweed is actually a nourishing ingredient for salads or cooking, which is available almost year-round in much of the country. Chickweed is a powerhouse of nutrients. Spinach may be the most mineral-rich green in grocery stores, but in comparison, chickweed boasts 12 times more calcium, five times more magnesium, 83 times more iron, and six times more vitamin C! It is also high in zinc, which helps build immune health.

Chickweed increases the absorption of nutrients and contains fiber and minerals which support intestinal health. Since 70% of the immune system is located in the gut, these functions are essential for immunity. It can also be used as a tea or tincture to help the immune system overcome infections, dry coughs, asthma, and allergies.

You may find comfrey growing in your yard or find it occurring naturally in a nearby area. Comfrey leaves can be chopped finely and used in salads, smoothies, soups, steamed like spinach, or steeped to make tea. They are high in protein, potassium, calcium, and Vitamins A, B12, and C.

The active compound in comfrey is called allantoin and is known to stimulate the growth of new cells by healing damaged tissues in the body. Allantoin is a leucocytosis promoter, which means that it increases white blood cell production. This function helps the immune system fight off disease.

Everyone is familiar with the humble dandelion, but did you know that its leaves, roots, and flowers have medicinal uses?

All parts of the dandelion plant have shown strong antioxidant function, protecting from cell damage and helping prevent many chronic illnesses. The easiest way to benefit from dandelion is to simply pluck the small leaves found at the center of a dandelion clump (these are the most tender and least bitter), chop finely and sprinkle them in salads for a nice tangy flavor.

Medicinally speaking, the most powerful part of the plant is the root, with its ability to detoxify and heal the liver. By stimulating bile production, dandelion root significantly improves liver function, removing obstructions of the liver, gallbladder, and spleen and purifying the blood against disease.

Dandelion has been shown to activate the immune system against cancers, which may be due to its ability to increase the secretion of a compound called tumour-necrosis factor-alpha. Specifically, the root could help induce cancer cell death in human pancreatic cancer cells, leukemia, and colon cancer cells.

When eaten, dandelion improves digestion by stimulating enzyme production. The high probiotic inulin component of dandelion leaves and roots increases levels of bifidobacteria and lactobacilli in the gut. Effective digestion and good bacteria balance are essential for supporting immunity.

The black elderberry is a small, antioxidant-rich fruit common to Europe and North America that is still commonly consumed as a jam or wine. For medicinal benefits, elderberry extract is available commercially in tablet or syrup form.

Once you know what elderberry looks like, you may spot it growing wild around your area. The berries and flowers of elderberry are packed with antioxidants and vitamins that may boost your immune system. They can help tame inflammation, lessen stress, and help protect your heart.

Some experts recommend elderberry to help prevent and ease cold and flu symptoms. At a microscopic level, elderberry promotes a healthy immune response against viruses by increasing the number of inflammatory molecules called cytokines. A study found that the vivid purple compounds from elderberries, called anthocyanidins, can directly inhibit a virus’s entry and replication in human cells, and can help strengthen a person’s immune response to the virus.

This is one of the most common garden weeds and one of the tastiest too. Lamb’s quarters can grow head-high, but the leaves are most tender on plants that come no higher than your knee. Pick the leaves and use in salads, casseroles, stir-fries, or smoothies, just like you would spinach.

Lamb’s Quarters contains a good amount of fiber, which is vital for promoting probiotic bacteria in the colon and, consequently, boosting your immune system. It also contains lots of chlorophyll, a great detoxing compound that fights infections. Eating the fresh shoots will deliver lots of Vitamin A and Vitamin C as well, which can help prevent colds and flu and boost your immune system.

Common mullein in gardens is considered a noxious and invasive weed in many states. You’ve likely seen mullein plants growing in fields and along roadsides, without even knowing you were looking at a medicinal powerhouse. Historically, mullein was used as an herbal treatment for coughs, congestion, chest colds, bronchitis and inflammation.

Despite it being a wild weed that will grow almost anywhere, mullein has many health benefits. Its main use is as an antibacterial against lung conditions such as acute and chronic coughs. It is also used in the treatment of bowel conditions, including irritable bowel syndrome, colic, diarrhea, or hemorrhoids.

Plantain (not to be confused with the banana type fruit, also called plantain), is a plant that can be found almost anywhere. In fact, if you’re walking around in any inhabited area, it’s hard not to bump into it. Somewhat thick and chewy, plantain leaves can be eaten in salads when chopped finely. They are fairly neutral in flavor but packed with nutrients.

Medicinally, the leaves contain some interesting bio-active compounds. The flavonoids and phenolic compounds in plantain have a variety of medicinal benefits, including anti-inflammatory and antimicrobial. Not only can this weed destroy disease-causing agents directly, but it has also been found to regulate immune cells, which can protect against numerous diseases, including chronic viral infections, tuberculosis, AIDS, and cancer.

Purslane is likely one of the most underappreciated weeds with the most amazing hidden benefits. The best thing about pursalne is its high levels of omega-3 fatty acids, which are known to help prevent heart disease and improve the immune system. Purslane contains a whopping 4mg per gram, compared to .89mg in a comparable green edible plant like spinach.

This healing plant has been used for hundreds of years to help alleviate cough, stomach upset, high blood pressure, anemia, diabetes, and fever. It is an excellent source of many nutrients and has a slippery texture that is soothing for the digestive system, which is at the heart of strong immunity. Don’t be surprised if you see purslane become more popular as a mainstream edible crop in the future!

Red Clover is easy to find in your backyard or a local park. It is a well known herbal tonic and immune-supporting herb that can either be consumed in a meal or used as a tea. The greens provide a high dose of vitamin C and could also help stimulate the production of white blood cells.

High in vitamin C, sheep sorrel assists the body in throwing off any viral infection. The tannins in sorrel also help to reduce excess mucous production. Sheep sorrel can be used to treat fevers and inflammation, soothe digestive problems, and support the immune system against intestinal parasites.

Thyme is not a weed perse, but the wild variety can often be found growing all over fields and ditches, so we’ve included it here. Hippocrates, known today as “the father of Western medicine,” recommended thyme for respiratory diseases and conditions.

Thyme contains an active compound called Thymol, which is one of a naturally occurring class of compounds known as biocides. These are substances that can destroy harmful organisms, such as infectious bacteria, viruses, and fungal organisms. Thanks to these functions, the herb has been shown to help with respiratory health, including coughs and sore throats. Thyme can support the immune system long-term and can be integrated into daily self-care as a preventative remedy for colds and flu.

Now that you’re aware of the value of these weeds, you can begin looking out for them in your yard, local park, and anywhere you venture outdoors. Why not try foraging in your area, or cultivating your own healing “weeds” for better immunity and more!