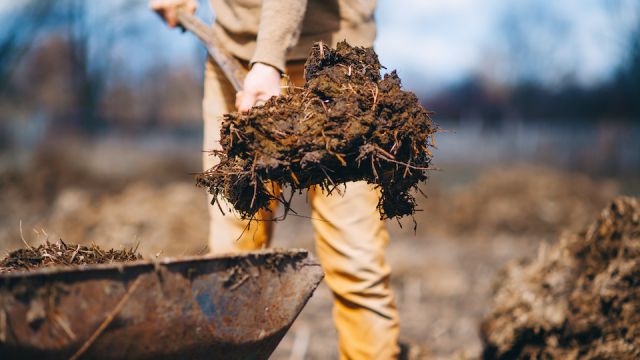 You may have heard that poop is good for your garden. If you want to grow big healthy plants and beautiful produce, you need poop! However, all poop is not the same – some types may actually undo all the hard work you’ve put into cultivating your garden. Before you go putting poop on your garden beds, make sure you know the difference between good poop and bad poop.

Why you should always use poop in your garden

There are loads of options out there when considering a fertilizer, but animal manure (we call it poo at our place!) is my number one go-to. Like most things, there are commercially-produced fertilizers available, but these are usually mass-produced, often include lots of chemicals and additives, and can be very expensive.

By comparison, animal poo is a much more natural option that is better for your soil and the environment and, in most cases, just as easily available as its commercial counterparts. Adding a good dose of animal poo to your veggie garden gives it a vital nutrient boost, with the poo of animals fed on grass and veggie scraps containing high levels of nitrogen, which your veggie garden will love. Animal manure also increases microbial activity in the soil and improves drainage and moisture retention in sandy soils.

The most important point to consider when choosing manure is how much nitrogen it has in it. Most manures have so much nitrogen they will ‘burn’ the roots of plants, making the leaves brown and stunted rather than green and lush. These are called ‘hot’ manures and must always be composted with carbon-rich materials, like leaves or straw, before they are applied to the soil.

Some manures – mainly from large herbivores like horses and cows – already have the ideal carbon-to-nitrogen ratio of 25-to-1, meaning they can be tilled directly into the soil without the worry of overfertilizing. These ‘cool’ manures tend to be crumbly with bits of grass still visible in them. The hottest manures come from omnivores, like chickens and pigs, and are stinkier and slimier than those with less nitrogen.

The best types of manure for your garden

Most people introduce manure to the garden by putting it in their compost pile. Certain types of animal waste, or manure, are key components of nutritious compost. Manure adds nutrients, increases microbial activity, and speeds up the composting process.

Keep in mind that animal manures come with a heavy bacterial load and thus requires special handling. You must also pay attention to the purity of the source. It is better to be a manure snob than to curse your garden with herbicide residues, growth hormones, heavy metals, and other undesirable substances that may be present in some manures. Animals raised using organic methods naturally produce better manure.

Cow, horse, sheep, and goat manures are the safest options for the home compost bin. Herbivore manure is relatively cool and is fair game for using in the garden without composting first, though in most cases it’s best to age the manure for at least a month or two before using. Simply aging a manure pile for three months can kill about 60 percent of the weed seeds present, and bacterial counts start to drop within days after the manure leaves the animal. Then, when the aged manure is mixed into the soil, soil microorganisms clear out residual bacteria in about a month.

There is a spectrum of potency in herbivore manure. In general, the more grass an animal has in its diet, the lower the nitrogen content. Animals that like to eat woody plants, like goats, or vegetables, like rabbits, have more concentrated nutrients in their feces.

Chickens and bat manures are also safe to compost. Fresh chicken manure and bat guano, when mixed into your compost pile, will help speed up the composting process and enrich the resulting compost. If you do add these manures to the garden when fresh, be sure they are dry first and don’t use too much, since these manures are relatively “hot”.

What about human poop and pet poop?

Because domestic house pets (like dogs and cats) are carnivorous by nature, their poop should not be added to a compost pile. Human poop also (even if someone is vegetarian!) should never be added to a compost bin or pile. Both dogs and cats have organisms in their stomachs and diseases in their poop that are harmful to the composting process and plant life, and ultimately harmful to humans. These diseases can get into the plants you eat and should not be digested. Human poop can also carry pathogens that can be extremely harmful.

However, there are certain worm composting bins that are ok for dog poop (never cat poop). Earthworms love to feed off of dog droppings, and the resulting worm castings are a very rich, usable compost that is safe to use in the garden. If you want to put dog poop in a worm composting bin, you can only put in dog poop – worms will not eat food scraps and poop mixed together.

If you are determined to use human poop for composting, there are composting toilets available. It might sound a little funny, but they do offer many benefits for an eco-friendly lifestyle. One interesting story, reported by Chicago landscaper, ecologist, and urban poo-pioneer, Nance Klehm involved taking waste recycling to the community scale with her “Humble Pile” project. For three months, 22 participants pooped into 5-gallon buckets instead of their toilets and brought them to Klehm to be emptied into aerated 32-gallon garbage cans in an undisclosed location. After 11 months, the 50 garbage cans were dumped into one large pile. After another year of composting with only comfrey and some old straw, Klehm delivered a fluffy compost — that tested negative for fecal bacteria — in 2-pound bags printed with “The Great Giveback.” If you decide to attempt the composting of human poop, do your research to ensure you’re able to do it safely.

With a little bit of know-how, you can save lots of poop from going to waste (pun intended) and give your garden a boost, too!

Growing Great Greens all Year Long (and why you should)

Yes, I Add Broken Eggshells and Baking Soda to My Tomato Planting Hole

How to Save Your Lawn From the Hot Summer Sun

Poison Ivy: What You Need to Know to Stay Safe

Good Poop, Bad Poop (What Works in Your Garden)

Ditch the Bug Zappers, Try This Instead

Unique Ways to Capture and Save Water For Your Thirsty Plants