How to Plant, Grow and Harvest Passionflowers 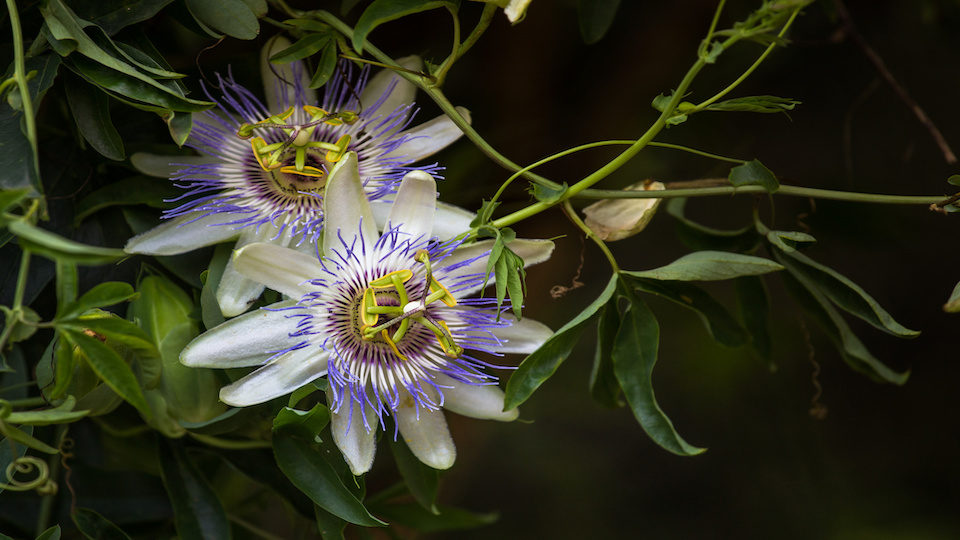 Passionflowers are the strikingly attractive blooms of plants belonging to the Passiflora genus. The flower got its name because early Christian missionaries to South America drew some parallels between its floral structures and the passion of Christ.

The members of this genus are mostly vines which grow wild in tropical and subtropical areas.  Several Passiflora varieties are now widely grown for their fruit, which has a unique sweet and sour taste with an exotic flavor. Examples are the purple or yellow fruit of Passiflora edulis, greenish yellow fruit of P. ligularis or sweet granadilla, and the giant granadilla P.quadrangularis. Some, like the P.vitifolia and P. caerulea are garden favorites, thanks to their large flowers in red and blue respectively.

There is also the common Maypop native to the United States, which has a long history of use in traditional medicine systems. This purple-flowered species Passiflora incarnata that grows wild in many parts of the country is what the Native American tribes used to treat coughs and colds, insomnia, and depression. They were even available over the counter as a sleep aid until 1978.

The leaves and roots are considered the most potent parts of the vine, and herbalists still use and recommend teas and tinctures of passiflora leaves and roots as a natural remedy for anxiety. Although their calming effect is well known, concerns about their safety, especially when combined with other herbs such as kava, chamomile, and valerian roots, discourage people from taking advantage of them.

Passionflowers, on the other hand, are much gentler and safer for general use and are quite popular as a relaxant. A tea made of 1 teaspoon of dried flowers steeped in a cup of is often used to help relieve hot flashes and other menopausal symptoms. People suffering from allergies, asthma, irritability, and difficulty falling asleep also find it helpful.

If you want to grow passionflowers for medicinal use, you need to make sure that it’s Passiflora incarnate. It happens to be one of the hardiest of all passiflora species, so you can grow it wherever you are. It’s a perennial up to USDA Zone 6, dying down to the ground in winter and coming back with a vengeance in spring. This fast-growing vine can also be grown as an annual in colder regions, or even as a container plant indoors.

Passionfruit vine can be started from seeds or grown from the many suckers that sprout around the mother plant. When growing from seeds, clean all the pulp away and soak them in warm water for a day or two. Sow a few in moist potting mix in a small pot and place the set up inside a large polythene cover to conserve moisture. The seedlings can be transplanted when they’re a foot tall and have at least 5-6 leaves.

Growing passionflowers in the garden

A spot that gets full sun in the morning and a bit of afternoon shade is best for growing passion fruit. The vine needs the support of a trellis, fence or a wall. You only need to guide it to the support initially; its strong tendrils will do the rest.

Passion fruit vine is not too particular about soil fertility, although rich soils would mean much more vigorous growth. The soil should be well-draining, though.

Make a hole in the ground slightly bigger than the root ball of the seedling and plant it level with the ground, packing in the soil all around. Water well and provide some shade until new growths appear.

This fast-growing vine needs a large container to start with so that you don’t have to repot it later. Use a well-draining soil mix of neutral pH. Place it where it receives full sunlight for most parts of the day and provide a trellis to climb on. Passiflora vines do very well in bright sunrooms and glasshouses, where they can climb the walls and spread along the roof. You may need to keep the vines within reach by occasional trimming.

Water every two to three days or whenever the top two inches of soil feels dry to touch. The plant will suffer if you allow the soil to dry out completely. Frequent wilting will make it more prone to diseases, too.

If you’re growing Passiflora incarnata exclusively for the flowers, you can pick them as they open. The flowers only last a day, so you’ll have to gather them the same afternoon. The fruit of this species is edible, but you need to have two different plants in the yard for cross-pollination.

Fresh flowers may be used for making the tea or may be dried in the shade and stored for later use.